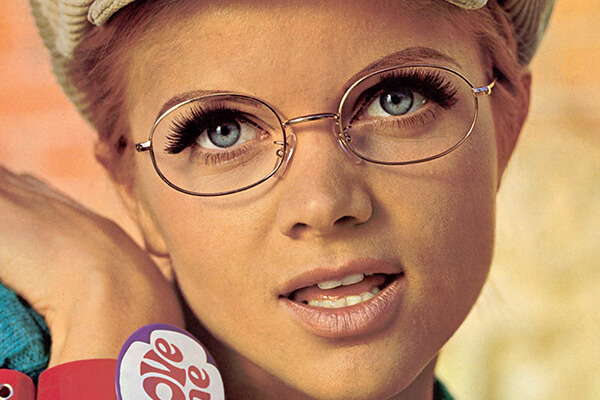 In 1965 Morel made its first pair of “little thread” glasses, using very thin rolled-gold wire. It was a turning point for the family business, both in terms of production and growth.
The rolled-gold technique, coupled with the delicate yet sturdy “No. 3 end pieces” (French end pieces), streamlined frames and made them lighter without sacrificing strength. It was a revolution in the eyewear world!

The emblematic model of this “fine line” was unquestionably the Tydée. Over a million of the frames (primarily known by their reference number, 6000) were sold worldwide!
They conquered a public that Morel had never reached before: young people, artists, and stars who unknowingly became “brand ambassadors.”

A Source of Inspiration

To Morel’s delight, the “little thread” style wasn’t just a passing craze; as late as the 1980s, Tydée frames still appeared in the company’s catalog.
The Tydée was a source of inspiration for the designer of the Marius Morel 1880, a modernized version of the iconic frames.

Morel’s Tydée is participating in Silmo’s 50th Anniversary Special Award contest. The prize honors the frames that have marked the history of French eyewear.

Vote for us by liking our photo!